If I had a million bucks 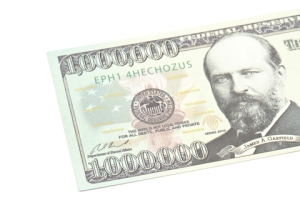 Have you ever played that game with your friends, your siblings, your spouse where you ask yourselves: what would I do if I were rich? It’s a fun game, an exercise of the imagination that usually nets a lot of silliness. But believe it or not, I think it’s good for us. When we stop playing such games, haven’t we’ve stop believing in the impossible?

When I was growing up, in the Beverly Hillbilly days of the world, “rich” meant a millionaire. Nowadays, I’m not sure you’ve even classify someone who had $1 million as  rich, though the person would certainly be considered wealthy. When you watch shows like Extreme RVs, with double-decker, two-story vehicles, two-person soaking tubs and chandeliered living areas, a million bucks feels like pocket change. But I’m choosing that number, because I don’t want to be rich. I just would like to be more comfortable.

So what would I do with my million bucks?

First and foremost, I’d buy peace of mind. That has meant different things in different periods of my life. In the poorer days, it meant paying the bills. Today, there are crunch times, but far fewer of those paydays when I feel good for 10 minutes, only to realize the money is already gone.

These days, peace of mind would mean more money in my retirement account and taking care of my elderly parents. My siblings and I spend a lot of time side by side, swords in our hands, battling old age issues as best we can. But I would love to see my mom and dad in an assisted living place that would shoulder the day to day worries about falls and not eating enough and finding ways to keep from getting bored.

Second, I’d buy delight. One of my favorite things in life—a gift God gave me when he gave me a kid at 41, was to rediscover how pleasurable it is to delight. With a child, it’s a simple task—a giant sucker or a pretty sticker. In my life today, it might mean presenting my husband with a Mediterranean cruise (okay, okay, that’s for me, too), send my daughter on a backpacking trip to Europe with some of her many friends or work a miracle for one of my sisters (yea, you know who you are): a personal introduction to Barbra Streisand.

Third, I’d buy independence for a short time. I am certainly an independent person, but what I mean is … now that I have discovered how truly wonderful it is to pursue your creativity, I absolutely hate the fact that I have one hour in the morning to do so. It is pure heartache to stop at the end of the hour I’ve allotted myself for creative pursuit in order to return to the reality that there are bills to pay. A million bucks might buy me a period of time when I could spend 8 hours being the true me.

I know myself well enough to know that I’d also give a chunk to Nyumbani.org, a charitable foundation I’ve worked with for many years that fascinates me because I’ve been there to see its phenomenal growth. It sprang from the heart and passion of a priest and a nun that wanted badly to help save a few orphans who had HIV/AIDs. But it’s grown into a multi-country-supported effort that reaches more than 4,000 children.

And I also know myself well enough to know that I would have to buy one purely materialistic toy just to experience the thrill of spending money. A fully-restored, baby-blue Thunderbird convertible would do nicely.

Posted by swopeparente on May 16, 2014 in Uncategorized

← The amazing phenomenon of my mom
My turn with the million →

4 responses to “If I had a million bucks”