RSS
← Thanks for an exciting November!
My own kind of holiday recipe →

Look for a Launch at our Neighborhood Grill 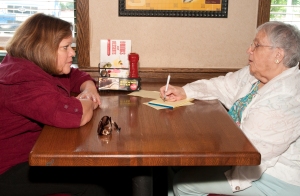 Mom and I at Applebee’s working out the details of one of our mysteries.

In our first book, Twist of Fate, mom and I acknowledged the wait staff of our local Applebee’s restaurant. We did so because of the many times we met for lunch there and worked out the details of the plot. We received more than a few odd looks as we talked about the best poison for not leaving a trace, the proper police procedures following a murder attempt, what expired drugs might be sought on the black market, how to let our villain escape discovery. But after we explained what we were doing, we also got enthusiasm and encouragement and have continued to collect praise for having received our dream of being published authors. Many of the people that work there recognize us now when we walk in. They know mom likes to get the closest booth possible because of her physical limitations; they know that she needs the blinds pulled half-way shut for her vision impairment; some even know to bring an extra plate because we love to split an entrée and a house salad.

So what more appropriate place to launch book three, Violet Fate, than our local neighborhood restaurant? I got in touch with the corporate offices of the restaurant and proceeded to get the same kind of enthusiastic response as the local restaurant. The young man I talked to congratulated us immediately on our success, then talked to his boss in communications as well as the local franchise owner, and they’ve all been supportive.

The event is still very much in the planning stages, but I have found this whole exercise invigorating and rewarding. Mom and I now know after three years that publishing a book is very hard work that pays pretty terrible wages in terms of monetary value, but a pretty fantastic salary if you like being paid by gratification. As my little sister Allyn Stotz, a children’s book in Baton Rouge, LA, (who is our No. 1 cheerleader) has said many times: it’s those voices that praise you for having the courage to pursue your dream that make this a worthwhile pursuit.

As mom and I found at this past weekend’s art and craft’s fair, one person’s comment or action can make an entire day’s efforts worthwhile. We sold just enough books to deem the fair a success. But about half an hour before the fair’s end, mom turned to me and kiddingly said: we need to sell one more set of Twist of Fate/Wretched Fate to make it a true accomplishment. Fifteen minutes later, a quarter hour before the fair closed its doors, a young man wandered by, found out we were local authors, then proceeded to pump us for information on what we’d been through. He was fascinated. Then, even though he readily admitted he didn’t read many books these days, he bought a set. I patted myself on the back for having convinced him they make great Christmas gifts. But when we went to address the signed copies to a gift recipient, he grinned sheepishly and gave his own name.

Thanks to Applebee’s and to Daniel for this week’s needed “salary”.

Posted by swopeparente on December 9, 2014 in Uncategorized

← Thanks for an exciting November!
My own kind of holiday recipe →

One response to “Look for a Launch at our Neighborhood Grill”