Why not the Easter Ostrich? 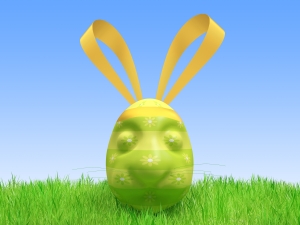 Easter is one of the most religious holidays of the year: a celebration of Christ rising above the horror of crucifixion to be reborn and give the world hope. So I’ve often wondered how a bunny with big floppy ears became the symbol of this holiday and why that bunny hides eggs and candy around our homes?

I looked on the Internet for a connection between the holiness and the holiday we created for our kids. The truth is that modern day traditions evolved from many sources.

Both the eggs and the rabbit have a long history in many cultures. The bunny didn’t used to have floppy ears—its predecessor was the more stately, larger hare. But its origin stretches back to the 13th century: hares were a symbol of fertility and the creatures were believed to be the constant companion of Eostre, the Anglo-Saxon Goddess of Spring.

Hiding eggs, on the other hand, may have a more practical origin. In many Christian religions, eggs were one of the forbidden foods during Lent. But chickens didn’t know that, and they didn’t stop producing their dairy product just so their owners wouldn’t be tempted. Many sources speculate that hard-boiling those eggs could have been a way to preserve them and hiding them a way of keeping them out of sight. Bringing them out at Easter would have been a celebration of the end of Lent.

Decorating eggs, on the other hand, stretches as far back as 60,000 years ago when Africans created some pretty impressive art pieces out of Ostrich eggs. How our modern-day chicken eggs are decorated during the holiday has differed from culture to culture. The early Christians of Mesopotamia, for example, stained eggs red in memory of the blood of Christ, and some areas of the world still do that.

The hare and egg were already firmly cemented as a team by the time they were transported to the U.S. by German Lutherans who settled in Pennsylvania during the 1700s. Those settlers brought with them the Osterhase, a German hare who bears gifts at Easter. Children would built “nests” in their bonnets or caps and hide them away in the barn or a garden. If those kids were good, the hare would visit their homes and lay colored eggs in the nests.

Rabbit-shaped candy is also a pretty old development. One web source reports the Germans created the first candy Easter bunnies in the 1800s from sugar and pastry. Germany and most of Europe perfected both chocolate bunnies and chocolate eggs long before they became popular here in this nation. About the only thing the U.S. may get credit for is making those bunnies hollow: that happened during World War II, when the need to ration everything was so critical.

No matter how any of this began, the mixing of the traditions, cultures and religions is the true origin of the modern-day celebration. By since I’m a mystery writer, I do want to leave you with a possible answer to the greatest mystery of all: why is it a bunny who delivers the eggs? Why not the Easter chicken or better yet, the Easter Ostrich?

The goddess of spring may be responsible for the rabbit and egg combination. Nordic legend says the goddess was late in her duties one year. As a result, a little bird’s wings were so injured by the lingering cold, it could no longer fly and faced starvation. The goddess felt so badly for the creature, she turned it into a hare and gave it the ability to lay eggs once a year. That’s not much of a superpower, but it’s a cool story to distract our kids as we sneak into the jellybeans.

Posted by swopeparente on April 3, 2015 in Uncategorized

2 responses to “Why not the Easter Ostrich?”