RSS
← Easing into the empty nest
Getting over the Speed Bumps →

Having Bob Swope as a Dad 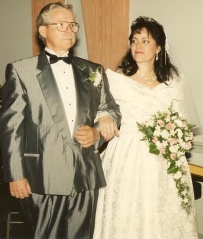 My father was the newspaper editor of our hometown newspaper, The Edgerton Earth. From that experience, I was introduced to journalism and a way to use writing as a career. However, even more than that, I learned the meaning of the word “respect.” My dad was a respected member of the community. People always knew he had the town’s best interests at heart, just like they knew he supported the local sports team, teachers at the school, the churches of the community, the local clubs that were important to the citizens.  But even more important, my dad gained respect because he showed that respect to others – not just to the community leaders but to every person with which he interacted. Let’s just say, the only person in our hometown of Edgerton, Ohio, who was shocked when dad received Citizen of the Year was dad himself. I was not in the least surprised. Dad has always had this wonderful way of seeing the good in everyone, starting with his own children, and it comes out in everything he does.

The other thing I think I got from my dad was a wonderful thirst for the humor in life. Don’t get me wrong, here. Dad can be a grumpy old man—at 87 he deserves his moments of griping. And I definitely inherited his impatience with all-things-technical. But dad does not get upset with people, just things. He has cursed many a curtain rod that would not go up right. However, when it comes to people and the stupid things they often do, dad laughs much more often than he curses. He has known, all of his life, that laughing at people, including himself, is both therapeutic and the better of two choices. Why get upset with people just for being PEOPLE. Being human is a blessing, not a curse. I think this view is extremely helpful in my writing because it allows me to look at situations that happen or difficult personalities of people as plot lines and character traits. Stories are not born from great phrasing, wonderful descriptions, polished wording. They are born from the flaws and differences between human beings and what happens when they are thrown together in life. 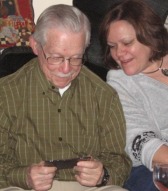 Mom knows by now how grateful I am to have inherited a small portion of her creative genius. I grew up with that genius, which has manifested itself in many forms. Writing is the first time I’ve been able to share in it with her. But I’m not sure Dad knows or could even begin to understand that I’m a writer—both in my professional life and now in my pursuit of fiction—because of what he gave me—my views on life.

Posted by swopeparente on June 15, 2013 in Uncategorized

← Easing into the empty nest
Getting over the Speed Bumps →

4 responses to “Having Bob Swope as a Dad”