The Swope Clan in Edgerton

I don’t think I’ve ever received as many hugs in as short a time as I did during a 48-hour period last weekend. I went to Edgerton, my home town, for a book tour with mom and my sister Allyn. Mom and I weren’t the stars of that show; Allyn has kept in touch with many people and has some really close friends who are her cheerleaders. They became our cheerleaders too. But all of us, including those of us not there as pen-wielding celebrities, but rather as supporters, got a huge dose of Home Town Pride, and it was nice to be a small part of that pride. 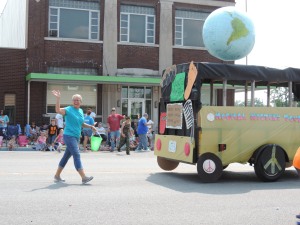 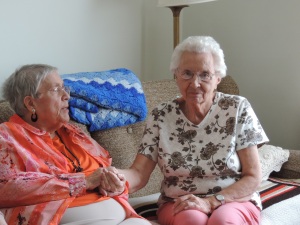 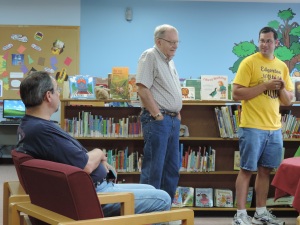 We were sitting at breakfast the first morning, already happy to be together and sharing laughs when my nieces walked into the restaurant. They flew in from Texas to surprise grandma and grandpa—arriving at 3 a.m. the previous night after a grueling flight on a cheaper airline. Once I saw them, I knew that—no matter the results of our book events—the weekend had just become something I’d never forget.

Our high school English teacher Richard Smith came to the Edgerton Public Library signing. I am quite certain I never hugged Mr. Smith in high school. Hugs were not so plentiful in those days. But neither Al nor I could help ourselves when we saw him. He is the teacher that got us interested in words. He laughingly explained he doesn’t read fiction (though he read our first book) anymore because his life was so consumed by it when he was a teacher. But he still has that delicious acerbic wit that delighted us as teenagers so much that we paid attention to him in class.

Verna Wortkoetter, the friend mom has remained closest to, not only had the clan and some old neighbors over for lunch, she invited some of mom’s old sorority sisters. The gesture was especially thoughtful because Verna was not part of that club. But she knew how important it was to mom, and she knew they’d all soon be trading memories of the parties they had and what had happened to the rest of the crew. I believe my nieces got a taste of grandma’s (and grandpa’s) wilder days by listening to the stories.

My husband saw his first parade, and (as I expected) instantly transformed into a kid. He kept himself from scrambling into the street after candy, but it couldn’t have been easy.

All of us choked up when grandpa struggled up out of his chair to sing the star spangled banner word for word. Alzheimers has nothing over patriotism!

God seemed to be smiling down on the whole weekend as the weather, which is usually hot and humid and miserable this time of year in Ohio, was gorgeous and sunny and cool.

The number of people who told us they were proud of what we’d done was incredible. It just kept coming and coming from old classmates and neighbors and friends of friends.

One of the signings we had was at Susan’s Hair flair right downtown Edgerton in the building that used to house the Edgerton Public Library. As I looked around at that building, I realized that it all really began there with mom pushing us all to learn to love books. Here it was, 50 plus years later, and we were back, signing books we had written ourselves. Thanks Mom, for getting us started on this path.

Posted by swopeparente on July 29, 2014 in Uncategorized

One response to “The Swope Clan in Edgerton”