RSS
← The Swope Clan in Edgerton
Heading into freshness →

A fan’s take on grief 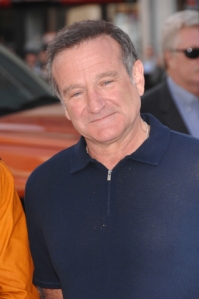 This has been a year of loss for my family: my brother in law passed last fall in the same week as our family pet. My husband’s cousin passed a few months ago—stricken down by a heart attack in his 50s. A dear aunt died after a year-long illness. Most recently, the man who married my husband and I died. And while these deaths left huge holes in my life, so did the passing of Robin Williams. He’s not family so he didn’t create the giant well of grief I felt for the others. But he took a part of me when he left just like these other people did.

It’s easier to talk about Robin because he was a celebrity I could not begin to know. The historical, biographical aspect of Robin’s life I’m looking forward to learning, and I’m sure there will be more lessons over the coming few days than I ever wanted to receive thanks to public outcry and media hunger. Like with the people close to me, however, the part Robin took cannot be replaced, though it might be copied.

When it comes to Robin Williams, the part was awe, and it’s something I like to feel, seek to experience, strive to present. Robin could wow, and to me, that is what anyone in any art form tries to do. As a comedian, Robin was true genius—his wit was so sharp, his brilliance so fine-tuned and quick, watching him do standup—oh heck, watching him do ANYthing—left me breathless. It was hard to keep up with the funny that poured from that man once he got going. And I always felt like I was on a roller coaster ride when I watched him―the part of the ride after you crest that first long hill and the car is shooting through the peaks and valleys of the thrill.

He affected me almost as much, however, as an actor. It must have been hard for him to take instructions from a director, and I’m sure he ticked off a few of them; but only temporarily until he got them to laugh. His acting had a level of depth that’s hard to describe—he played a crazy man in a photo booth with equal passion to a downtrodden widowed man who befriends a homeless man or a motherly drag queen. His movies were not always popular, but they are some of my favorites.

I’m angry with Robin Williams for taking the awe away in such a tragic way. But I know I’ll get over that aspect of what happened yesterday—and I should get over it. I’ll read about him and try to figure out why someone who created such joy could feel such despair. I won’t figure it out because I’m not like Robin in any way or even part of Robin’s family.

Posted by swopeparente on August 12, 2014 in Uncategorized

← The Swope Clan in Edgerton
Heading into freshness →

2 responses to “A fan’s take on grief”